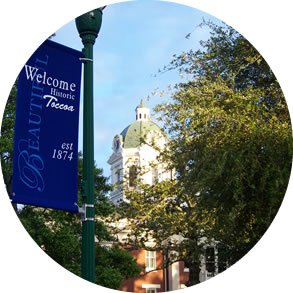 THE MAIN STREET PROGRAM  began in 1990 to facilitate the revitalization of downtown Toccoa. The Mission Statement of Main Street Toccoa is to improve Toccoa’s quality of life by strengthening downtown’s role as the community’s heart. The Vision Statement of Main Street Toccoa is: Toccoa Main Street is a nonprofit organization formed to make the downtown district the economic and cultural center of the community. The overall objective is to improve the viability and appearence of the downtown district and to stimulate long-term reinvestment through business recruitment and retention, all within the context of historic preservation. Main Street Toccoa has been accredited by the National Trust for Historic Preservation since 1999.

Toccoa’s Program is based on the National Trust for Historic Preservation’s recommended four-point approach to downtown redevelopment within the context of historic preservation.

The Downtown Development Authorities Law of 1981 created a seven-member board of directors which was reactivated in 1990 and appointed by the City Commission. The DDA, a volunteer organization, has overall responsibility of the Main Street Program. Four of the directors must be owners of downtown businesses. The DDA provides advocacy and support for program efforts to:

The DDA meets the second Friday of each month at 8:00 a.m. in City Hall. Board members chair one of the four committees that comprise the Main Street Program. Toccoa’s committees are based on the National Trust for Historic Preservation’s recommended four-point approach to downtown redevelopment in the context of historic preservation. The Main Street Program’s professional staff includes a Main Street Manager.