Stephens County was created on Aug. 18, 1905, from parts of Habersham and Franklin Counties. Named in honor of Alexander Hamilton Stephens, a Georgia statesman and voice of reason during the tumultuous Civil War Years, it was Georgia’s 143rd county.

Stephens, known as Little Alec because of his small stature, served in the Georgia House and Senate from 1836 to 1843 and established his reputation as a dedicated public servant. He was elected to the United States Congress in 1843 and served for 16 years. Worn out and disgusted, with the problems plaguing the nation at that time, Stephens did not seek re-election to Congress in 1858 and returned to Georgia in 1859.

Two years after leaving office Stephens was elected as a delegate to the Georgia special convention to decide on secession from the United States. During the convention, as well as during the 1860 presidential campaign, Stephens called for the South to remain loyal to the Union, comparing it to a leaking but repairable boat. He served as vice president of the Confederacy from 1861 until 1865.

After the Civil War, he was elected to the United States Senate in 1866 by the first legislature convened under the new Georgia state constitution. He was not allowed to take office because Georgia had not been readmitted to the union. He was elected U.S. Representative in 1873 and served until 1882 when he resigned to become Governor of Georgia.  Stephens died on March 4 1883, four months after taking office.

The land Stephens County now encompasses is one of the earliest inhabited areas of the state. Evidence indicates American Indians lived in this area from about 500 A. D., prior to the rise of the Mound Builder culture.

The Mound Builders tribe thrived in Toccoa, at the foothills of the Great Smoky Mountains. They were followed by the Cherokees who, legend says, named the area “Toccoah,” meaning “beautiful” in their language. The Cherokees migrated to this area in the 15th Century, but did not become the dominant tribe in North Georgia for another 200 years.

There were a number of Cherokee settlements in the area. Two of the largest were Estahoe, near the location of Yonah Dam today, and Tugaloo on the lower Tugaloo River. Inhabited by more than 600 people, Tugaloo was a trade center at the confluence of Toccoa Creek and the Tugaloo River, a religious meeting place and a congregating point for the Cherokees. The town included a council house and some 200 lodges.

Tugaloo Town ceased to exist during the Revolutionary War when Cherokees aligned themselves with the British forces in the area. Tugaloo was attacked and destroyed by members of the Georgia and South Carolina militias. The only evidence of the Cherokee town that remains is a large Indian mound rising above the waters of Lake Hartwell. A historic marker on Highway 123 at the Georgia-South Carolina border helps mark the spot.

The first white settlers in the region followed the navigable rivers inland and the Tugaloo brought the white man to the area now known as Stephens County. The first non-Indians to settle here were Revolutionary War veterans between 1775 and 1783. Jesse Walton, a hero of that war, built a home in the area and died defending it in one of many violent encounters between settlers and the Cherokee. It still stands today as one of the county’s many points of interest.

The Indians developed a trail from the hills of North Carolina through the Cherokee town of Hiawassee, south to Unicoi Gap, then southeast to the headwaters of the Tugaloo River. In the early 1800s the Cherokees and early settlers upgraded the trail into a toll road, building and improving bridges, adding rudimentary drainage control and even banking some curves. The impact of the new road was immediate, with more settlers moving to the area. Four years after the road was completed (1812-1813) the Cherokees ceded much of Georgia east of Unicoi Gap to the State of Georgia.

Additional white inhabitants, enticed by free land distributions, arrived here after the Indian cessions of 1818 and 1819. They settled along the banks of the area’s four major rivers, the Chattahoochee, Soque, Tallulah, and Tugaloo. The white population increased slowly until gold was discovered in northeast Georgia; the ensuing gold rush brought sudden growth, eventually resulting in the removal of the Cherokees from the area in 1838. Soon thereafter wealthy slave-owning planters established themselves in Habersham County and areas now included in Stephens County.

The land Jesse Walton died defending was sold, modified and remodeled several times over the years and eventually sold to Devereaux Jarrett in 1833. Jarrett developed it into a general store, blacksmith shop and inn and it has survived until today. The state runs Traveler’s Rest as a historic monument to those early days.

Between 1870 and 1900 the area’s economy was enhanced by the arrival of railroads. The Atlanta-Charlotte Airline Railroad selected a crossroads for its station in the area and what is now known as Toccoa was born as “Dry Pond” because of a wet weather pond that dried up during the summer months. Shortly after the completion of the railroad in the early 1870s Dry Pond changed its name to Toccoa, Cherokee for beautiful.

Rail travel through the Blue Ridge brought tourists to the Tallulah Gorge beginning in 1882. One of the largest gorges east of the Mississippi, Tallulah Gorge quickly became a popular tourist destination. North Georgia’s first tourist attraction drew thousands every summer, and with the arrival in 1882 of what would become the Tallulah Gorge Railroad thousands a year turned into thousands a week. On Sundays during the summer the twice daily railroad excursions would expand to five, bringing 2,000 people on that day alone.

A remarkable drop in elevation and hard-rock gorges made it attractive to Georgia Power. Early environmentalist and widow of James Longstreet, Helen Dortches Longstreet, waged the first large-scale environmental battle in the United States to save the gorge. She eventually lost the battle, a dam was built and, although the gorge still stands visible, the flow of water and tourists became a trickle.

Immigrants from Europe (primarily from Germany and Switzerland) arrived in the 1880s to plant vineyards and set up wineries, but the state of Georgia adopted a strict prohibition law before their labor could yield profits, and many of them returned to Europe.

Spurred by the tourist industry and the development of Tallulah Gorge, Toccoa grew so rapidly it was bigger than the Habersham County seat of Clarkesville. For a time a group of county residents fought to relocate the county seat to Toccoa, leading to such a feud that when the courthouse in Clarksville was blown up in 1898, those advocating the move to Toccoa were blamed. The feud was ultimately resolved by the creation of Stephens County in 1905 with Toccoa as its seat.

Tourism was rekindled in Stephens County with the formation of the Georgia (later Chattahoochee) National Forest in 1937, bringing more visitors to the area than had been seen the previous 25 years since the dam was built at Tallulah Gorge.

Great strides were made in Toccoa-Stephens County during the late 1930s. Capps Cotton Mill was purchased in 1937 by J&P Coats Co. and would remain a manufacturing fixture in the county for almost 70 years. Industrialist R.G. LeTourneau opened an earth moving equipment manufacturing plant in 1938 and the Toccoa Airport was constructed at the end of that year.

Stephens County gained national attention on March 23, 1938, when President Franklin Delano Roosevelt stopped in Toccoa and made an informal speech from his “Special Train.” A few hours later he delivered his famous “Brother’s Keeper” speech in Gainesville.

World War II had a significant impact on Stephens County. The U.S. Army created Camp Toccoa where paratroopers in the army’s new airborne units were trained. The LeTourneau plant churned out earth moving machines used by the military in all theaters of war. Employment at the plant grew to as many as 2,000 during the war years. LeTourneau’s Lake Louise facility, later known as Georgia Baptist Assembly, was converted to a hospital to treat wounded service personnel.

The mountain was made famous internationally by Steven Spielberg’s World War II TV series Band of Brothers. During the war American paratroopers training at Camp Toccoa ran up and down Currahee as part of their training regimen. The name of the mountain became the motto for these paratroopers including the famous quote: “3 Miles up, 3 Miles down.”

Stephens County again made the national news on November 6, 1977, when the dam above Toccoa Falls burst sending the contents of a small lake onto the campus of Toccoa Falls Institute. Among the 39 dead were students, workers, and young children. Many people helped the college in the crisis, including First Lady Rosalynn Carter. 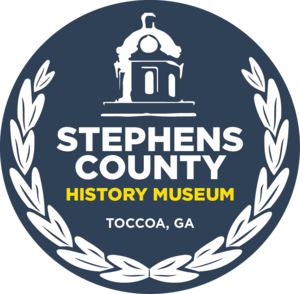