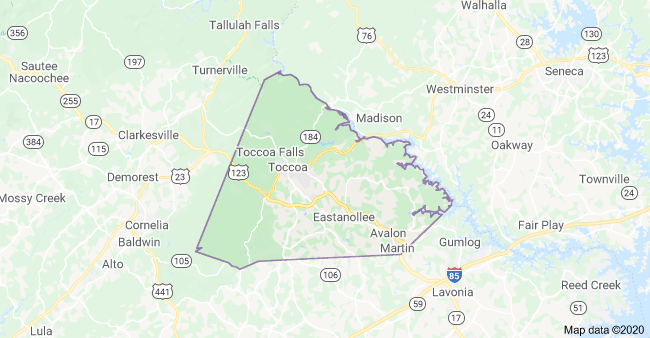 Stephens County, nestled in the foothills of the Blue Ridge Mountains in Northeast Georgia, is known for its friendly people, progressive government, quality schools and scenic beauty.

Interstate Hwy. 85 and U.S. Highway 123 traverse Stephens County and future plans call for State Hwy. 17 to be four laned through the county. Stephens County is about 90 minutes north of Atlanta, about an hour from Greenville, S.C., and 45 minutes from Athens and Gainesville. The county is served by the 5,000-foot R.G. LeTourneau Airport and is one of three Amtrak stops in Georgia on the Crescent line that runs from New York to New Orleans.

The region is known for its ruggedness and scenic beauty. Among the most scenic areas of the county are the 900-foot-high Currahee Mountain, the last mountain in the Blue Ridge Mountain chain, and 186-foot-high Toccoa Falls.

Originally inhabited by Mississippian Indians known as “Mound Builders” and then by Cherokees. The non-Indians in the area were Revolutionary War veterans who settled there just after that war (1775-83). The Cherokee who lived in these mountains called them Sah-ka-na’-ga – “The Great Blue Hills of God.” Part of Currahee Mountain and most of the rest of the North Georgia mountains are included in the 750,000 acre Chattahoochee National Forest.

The state legislature established Stephens County, Georgia’s 143rd, on Aug. 18, 1905, from parts of Franklin and Habersham counties. It is named for the statesman Alexander Stephens

There are three incorporated communities in the 184-square-mile county, Avalon, Martin and the county seat, Toccoa, named for the Cherokee word for “beautiful” or “where the Catawbas lived”. The city was created in 1873 around a railroad stop known as Dry Pond. In its early days after the Civil War (1861-65), it was the site of a coaling station for the Georgia Air Line Railroad. Toccoa’s position on the railroad between Atlanta and Charlotte, North Carolina, and later to points further east, as well as its proximity to water power, were key factors in its rapid growth. Incorporated in 1897, Toccoa became known as the “Furniture, Thread, and Steel City” for its growing industries.

The original courthouse, built in 1907, was placed on the National Register of Historic Places in 1980 and restored in 2008.

Avalon (named for the Arthurian island of paradise) was founded in 1882 by Richard Dempsey Yow and incorporated in 1909. Yow and two brothers started a successful mercantile business there. Although it was at one time a self-contained village with a railway station, post office, school, and church, Avalon’s tiny population now shares these functions with those dwelling in nearby towns.

Martin was incorporated in 1891. Its first settler, Henry C. Black, was the Air Line Railroad agent at its station (set up in 1877) at the junction of Red Hollow Road and the railroad. Henry Black built houses and established stores around the junction, which attracted other settlers. The Red Hollow Road was an important conduit for farm products from the mountain areas to Augusta and Savannah. The town was named for John Martin, a Rhode Island man who became governor of Georgia in 1782.

Along with natural beauty, the county is known for its historic sites and opportunities for outdoor recreation. Traveler’s Rest, a two-story building constructed before 1825 near Lake Hartwell, was used as a tavern, trading post, post office, and inn in the mid-1800s. Today the Georgia Historical Commission owns Traveler’s Rest and operates it as a historic site.

Both Lake Hartwell and Yonah Lake were built on the Tugaloo River to produce hydroelectric power in the mid-20th century. Lake Hartwell is surrounded by 80 public park sites, including Tugaloo State Park, offering fishing, boating, hiking, and other outdoor pursuits.

Notable residents of Stephens County include Paul Anderson, an Olympic gold medalist in weight lifting. James Brown, the Godfather of Soul, made his first public appearance at Friendship Baptist Church and married his first wife, Velma Warren Brown, on June 27, 1953, in Stephens County.